Macau is a fascinating place: an intriguing fusion of Portuguese colonial heritage, glamorous Las Vegas casino lifestyle and traditional Chinese culture. Explore it all on this unmissable day trip from Hong Kong! 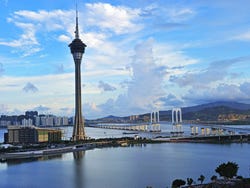 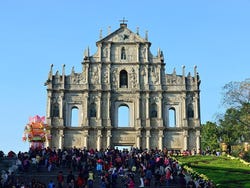 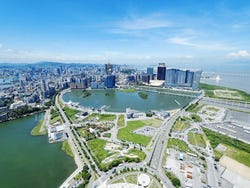 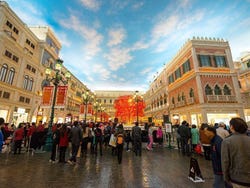 On the morning of your tour, you'll be picked up from your hotel in Hong Kong and taken to the port, where you'll board a ferry for the cruise to Macau. A Portuguese colony from the 16th century until 1999, it is now a special administrative region of China, and the only place in the enormous Asian country where gambling is legal, making it a top tourist destination.

After an hour-long journey, you'll disembark on Macau peninsula and begin your guided tour of its most important places of interest. You'll be immersed in its incredible cultural contrasts as you visit the A-Ma Temple, a sanctuary dedicated to  the Chinese sea-goddess Mazu thought to be the oldest on the island; the ruins of St Paul's, a 17th century Portuguese Jesuit church, and Na Tcha Temple, a traditional Chinese folk religion temple.

The next stop on your tour will be at the remains of the fortified wall built by Portuguese colonists to protect Macau in the 16th and 17th centuries, one of many examples of the area's European heritage. You'll then take a break to enjoy a delicious buffet lunch at the Rio Hotel. After eating, you'll head to Macau Tower, where you'll have the opportunity to visit the observation deck if you'd like (not included), before exploring the Fortaleza do Monte. The hilltop military fortress, which was built to protect the settlers' property from pirates, forms part of Macau's historic centre, a UNESCO World Heritage Site.

Your tour will come to an end embracing the striking contrast of Macau's past and present, as you enter one of its spectacular world-famous casinos. The island's gambling scene has gone from strength to strength since its legalisation in the 1850s, and it has taken over Las Vegas as the gambling capital of the world.

At the end of your tour of Macau, you'll be taken back to Hong Kong port for around 5 pm. You'll then be free to make your own way back to your hotel or to explore the city at your leisure.

View complete description
US$ 157.30
No hidden fees or surcharges
Book

Not refundable. This activity does not permit modifications nor cancelations.
like Free

8.20 / 10 9 reviews
See Hong Kong lit up by night, with a guided tour of the Yau Ma Tei neighbourhood, where you'll visit one of the oldest markets in the city.
Free!
Book
like Free

9.50 / 10 11 reviews
This free tour of the Hong Kong financial district will reveal all the secrets of the enormous Asian metropolis and its colonial past.
Free!
Book
like

7.70 / 10 6 reviews
Discover the contrasts of Hong Kong on this guided island tour. Visit Aberdeen Harbour and admire the skyline from Victoria Peak.
US$ 41.80
Book