Cross the impressive Hong Kong-Zhuhai-Macao Bridge, the world's longest sea crossing, and enjoy a guided tour of the fascinating city of Macau, known as the Asian Las Vegas. Unmissable! 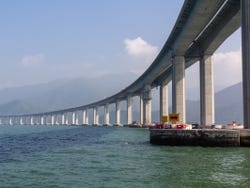 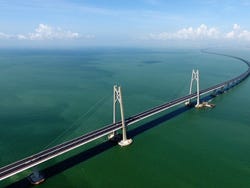 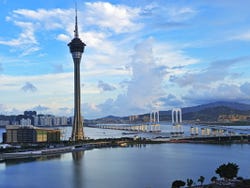 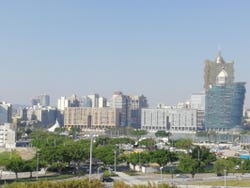 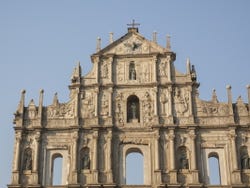 After being picked up from your hotel in Hong Kong, you'll board a comfortable bus and set off on your day trip to Macau, beginning by driving over the longest sea crossing on Earth: the Hong Kong-Zhuhai-Macao Bridge.

This incredible feat of engineering was constructed to connect Hong Kong, Macau and Zhuhai, three of the area's most important cities. As you travel over the 34-mile (55 km) bridge-tunnel system, admire the awe-inspiring infrastructure that crosses the Pearl River Delta.

In just 30 minutes - a journey that took over 4 hours before the bridge was built - you'll reach Macau (also spelled Macao), a city and autonomous territory popularly known as the Las Vegas of Asia. Do you know why? It's the only place in China where gambling is legal.

Enjoy a guided tour of Macau's most important monuments and landmarks while hearing all about its fascinating history. You'll visit the imposing Macau Tower, which you can take the opportunity to climb for the best views over the city (ticket not included), and the 15th century A Ma Temple, the first and most important temple in the city. Have a well-earned break next, treating your taste buds with a buffet lunch of typical dishes at a local restaurant.

In the afternoon, you'll head to the Ruins of St Paul's, the remains of the façade of a church built by Japanese Christian exiles in the 17th century. The UNESCO World Heritage Site is covered in intricate carvings of Jesuit scenes influenced by Oriental themes. You'll continue your exploration of the Historic Centre of Macau, admiring the architectural legacies of the territory's Portuguese colonial past.

Finally, as you're in the gambling capital of the world, you'll end your tour with a visit to the casino. After enjoying all the entertainment centre has to offer, you'll return to Hong Kong by high-speed ferry.

Please check local restrictions before traveling. All of our services comply with recommendations to avoid the spread of Covid-19.

The activity takes place with a guide that speaks in English.

Transport by bus via the Hong Kong–Zhuhai– Macao Bridge.

You can book up until 48 hours before the activity as long as there are still places. Book now to guarantee your spot.

Electronic. Show the voucher on your phone.

All services published on Civitatis are carried out in accordance with our Sustainability Code.

No printing of documentation required.

If you have any other questions please contact us.

US$ 162.10
No hidden fees or surcharges
Free cancellation up to 48 hours before the service starts
Book

Free! Free cancellation up to 48 hours before the activity starts. If you cancel under this time or do not show up, you will not be refunded.

These are genuine reviews written by our customers.

I travelled with my partner
6

I travelled with friends
8

I travelled with friends
8

I travelled by myself
Show all the reviews
like

No rating yet
Experience the most popular activity in Hong Kong with this Dinner Cruise & Squid Fishing. You'll also enjoy a delicious meal as you sail around Victoria Bay.
US$ 38.20
Book
like

10 / 10 2 reviews
See Hong Kong lit up by night, with a guided tour of the Yau Ma Tei neighbourhood, where you'll visit one of the oldest markets in the city.
Free!
Book
like

8 / 10 1 review
This free tour of the Hong Kong financial district will reveal all the secrets of the enormous Asian metropolis and its colonial past.
Free!
Book